Fear is insidious. It permeates our consciousness, drags us down, gets blamed for bad decisions, and perpetuates its existence by subtly disguising itself as religion, relationships, jobs, families and addiction. For such a powerful nemesis stalking us, we consistently invite it into our homes to have dinner with the in-laws and ask it to sit with the kids. We surreptitiously give open permission for it to bury itself ever deeper into our psyche, nestled somewhere between identity and self worth. Our culture is ripe with fear, and its very close cousin, pain. Watch the gawkers on the freeway rubberneck their way to a virtual standstill, ostensibly to show compassion and empathy for others in pain, but truly the hope is to gain a glimpse at something gruesome; something to continue to feed our desire to live in fear.

What is this vested interest in fear? Why do we, as a race, perpetuate its existence, even in the face of our own annihilation? The outward signs of fear are obvious, and in the extreme sense take shape in the form of intercontinental ballistic missiles and chemical weapons. These armaments are cruel and terrible, in both their ability and method of taking human life, as well as damaging an already crippled ecosystem.

The person that taught me the most about the root nature of fear wasn’t a person at all – it was a dog. A pit bull/lab mix named Bill. Before I knew Bill, my only real relationship with a dog was when I was a child, a mutt named Lu-Lu. She was such a mix, that it was virtually impossible to tell her breed; with the exception of a permanent pink stain on her nose and front left paw from one of her forays into the unknown, she was mostly black with some white markings on her nose, belly and paws. Being the family –and neighborhood – garbage disposal perpetuated her indistinct, rotund sausage shape. Lu-Lu was a scrounger; a dog that will do anything to get into your garbage can in the hopes of finding some putrid piece of rotting refuse to gorge herself on – and that is exactly what she did every chance she got. She had her little route she would go on when she would break the chains of her imprisonment at my parent’s house. It was good that she was so predictable, as it always fell to my brothers and me to find her following her daring escapes. My impression of her at the time was that of the thing that lived under the table, and the reason I would be forced away from my “legos” to go outside for intervals of no more than a block or two at a time, to allow her to deposit the reeking excrement that was the result of her gluttony. There was no personality, no perceivable consciousness, no one home behind those dull, brown cow eyes that would not hold yours for more than a brief fleeting moment. 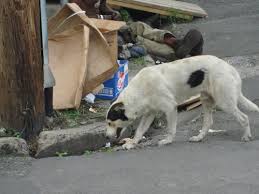 Years later, Lu-Lu was in the driveway and sliced open her leg on some broken glass there. Mom took her away to the vet, and came home alone. She explained that the damage was too severe, and that, given her age, would not heal properly. Consequently, Lu-Lu was sent to the happy garbage can in the sky, ostensibly to eat all the rotten festering food she could lay paws on – and that was that. My first experience with death had absolutely no affect on me – I had no idea that Lu-Lu was even a living entity that might have to die someday. And so my ideas about dogs remained – until Bill. Bill had a personality; he knew tricks and played games that only a being with a certain level of conscious thought could be capable of. I had many amazing moments with Bill in those years; but my favorite experience with Bill was when he taught me about the root of all our fears.

One day, I accompanied Bill and his person, Brenda, to get a puff pastry at one of our favorite little shops on Broadway in Seattle. Brenda was on the injured list at this time, still reeling from a recent knee surgery. She tied Bill to one of the small metal tables outside the shop; more as a formality than to actually restrain him. Bill obviously outweighed the table, but with a little resistance on his leash, he was easily coerced into patiently waiting for us to retrieve our pastries. Besides – he always got the last bite.

What happened next was a little blurry, but something startled him, and he jumped back just enough to topple the table behind him. The loud racket startled him even more, and he reacted again to the loud noise by moving away from it – something virtually anyone would do. What happened next was a mixture of insane comedy and horrible panic – Bill tried to move away from the sound of the metal table being dragged behind him. Of course, with every step he took, the sound continued to follow him. Completely spooked at this point, he broke into an open run, dragging the table, clanging like a four alarm fire, down the sidewalk. Brenda can’t run, so it was left to me to chase him down, screaming at people to stop him as this wild eyed, terrified pit bull was racing directly into the intersection – and oncoming traffic. Passers by watched with amused detachment as, at the very last second before Bill plunged into the road and certain death, the table got caught on an empty bike rack, boomeranging Bill backwards with an alarmingly ferocious snap.

I wasn’t sure if I would find a dead dog at the end of that leash; he could have easily broken his neck – all to escape a table. Luckily, he was fine, and having survived his horrible ordeal, seemed no worse for wear and tear; just a little shaken up. Brenda came hobbling up, muttering curses under her breath at all the people that just stood there as Bill went running by, ignoring my frantic pleas for help. Why didn’t anybody reach out and stop the flying table, or at the very least stand in Bill’s way? There was no confusion as to what was happening, nor to what we were asking for – what stopped them? A freaked out pit bull is not something that just anyone wants to get involved with. There is a stigma surrounding pit bulls that they are ferocious, vicious beasts with locking jaws. Nothing could be farther from the truth; by nature, there aren’t many breeds friendlier than pit bulls – and their jaws do not lock.

The obvious answer is fear. Fear is the root of prejudice; if you read one story about a dog attack, and the breed is mentioned, that breed gets marked as dangerous and undesirable. A few years back, Rottweilers held that distinction; today the illustrious title of “worlds deadliest domesticated animal, ready to snap at any time” belongs to pit bulls. Onlookers that witnessed our microcosmic tragedy did nothing to help because they were afraid. Our nomadic ancestors probably stayed alive due to fear; indeed having a healthy fear of the bear cave probably steered them completely clear of danger, allowing the tribe thrive long enough to eventually create us. For that, I am eternally grateful.

But now that we have the combined tools of reason with the faculties of higher consciousness, it would seem weird to take the long way around a bear cave if there is no bear in it. Fear is irrational by nature, but it is a completely irrational notion to be afraid of a cave. We have the ability to keep ourselves alive by using our minds. Fear is an evolutionary tool that beings who lack higher consciousness use to stay alive; another word for this is instinct. Instinct seems to be a word that is overused; to some, following your instincts is the same thing as instinctually being afraid of bears. But thinking, conscious beings do not need fear to keep them away from bears; indeed, they know better.

This is where the line begins to blur, because where fear would tell you to avoid bears, so would logic bring you to the same conclusion. Let’s see – long claws, big teeth, a whole lot of mass, working on instinct – hmmm; yes, stay away. But if you listen to fear, it would tell you the same thing – hence it would also appear that fear has the power to keep you safe. Fear is not a product of higher thinking; indeed it is a primal mental construct that has its deepest roots in the autonomic reptilian region of the brain. The very existence of a fear depends on you staying afraid, and in order to do this it must also foil reasoning – so for it to function, it must also keep you stupid.

None of this makes any difference to poor Bill. In his world, it would seem that fear kept him alive long enough to outrun that blasted clanging table that was chasing him. And he knows just where it lives – in that little pastry shop on Broadway. For years after this happened, every time Bill went near the pastry shop, he would whimper, pull away at the leash, look worriedly around him – lest that table chase him down for an encore. Looking beyond the fact that fear would definitely keep Bill out of the path of any bear, there emerges the idea that fear is what keeps him safe. The truth is, it is Bill’s blanket response to fear that appears to keeps him safe; but Bill doesn’t have a lot of options. Humans on the other hand have the ability to reason; yet still we respond to fear as though it is our master. After all this time; haven’t we learned better?

Next time…the Physiology of fear.